PHOTO SCREENSHOTS FROM "AT IT AGAIN"

CLICK THE PHOTOS BUTTON (ABOVE) TO VIEW THE GALLERY

The Gaston Symphonic Band is holding a Spring concert filled with some new tunes and old favorites. 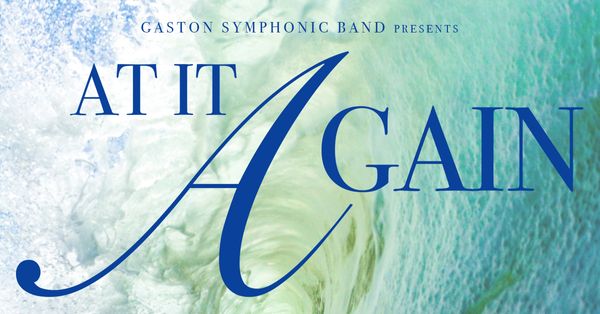 The Gaston Symphonic Band has resumed practice and are welcoming new members. While Covid protocols prevent us from using Grier Middle School, the Second Baptist Church of Mt. Holly has opened its doors to the band. Rehearsals resumed in October. Anyone seeking membership can email us at gsbsound@gmail.com.

Maestro John Gunter and the band's members have been working on a program of Christmas season favorites. This entertaining program of familiar tunes is sure to entertain everyone. Make plans to attend this concert on Tuesday, December 7, 2021, 7:30 PM. Second Baptist Church, 740 Rankin Ave., Mt. Holly, NC.

THANK YOU TO THE COMMUNITY RUN 2019

The Community Foundation of Gaston County sponsors the Community Run each year. This is a major fund raising activity for non-profits on Gaston County. This year the GSB received a total of $5,578.63. There are 28 donors who gave money to the GSB. The foundation matched these donations with an additional 37%. Many thanks to those who donated. We'll use your gift to make music once again for Gaston County.

The Gaston Symphonic Band wishes to thank everyone who made our 2018-2019 season a success.

The GSB was honored to play at the dedication of Cramerton's Veterans Memorial Plaza. The band helped bring in the Christmas Holidays in McAdenville and Gastonia. Our season ended on Memorial Day at the Gaston County Veteran's Memorial Service. Attendance at these events was in the thousands.

The band was ably led this year. Bill Todd, Jr. completed his second year as president of the board of directors. Under Bill's leadership the band has documented and formalized many procedures which will smooth operations in the future. Well done Bill.

Musically, the GSB once again was led by John Gunter, Music Director and Conductor. His leadership and passion keep the band members on their toes. John has grown right along with the band. From playing Tuba over 10 year's ago, John became associate director and finally Music Director.

The GSB is fortunate to have many benefactors. Charitable Foundations, businesses, and individuals have donated the funds to keep the band making music. Thank you for your continued support.

Most of all the GSB's success is due to the fifty or so members who volunteer their time and talent in order to provide high quality music to our community at no cost. These members gave more than 5,000 hours of their spare time and paid their own expenses in order to fulfill the mission of the GSB.

It's time for a well-earned summer break, but check back for upcoming plans for next  year.